Raider Nation has not yet felt the full impact of losing Al Davis.

This will be our first year without the legendary and controversial owner/coach, a unique figure in the history of professional football.

Losing Al was a terrible blow, but the time had come for a change in leadership. And we all agree that former Raider linebacker and Packers front office master Reggie McKenzie is the perfect guy for the job.
The first Raider team in 50 years not picked and fielded by our leader Al Davis, RIP.

We have a talented team, and good coaches. There’s no reason why this team can’t compete for the division title this year, and beyond.

However, when a new GM takes over after 50 years with the last guy, logic dictates that it may take him a while to get the ship going in the direction he wants it.

Patience is not a Raider fan virtue, but in this case, the best is yet to come.  I will enjoy every minute of this season, but I know that the greatness of the Raiders lies in it’s future.

I believed in Hue Jackson and Al Davis, they gave it one last try. But the day Al died, that dream also ended. I thank Hue for giving us a chance last year and being a Raider to the heart.  I wish things had gone otherwise, but it was not meant to be. 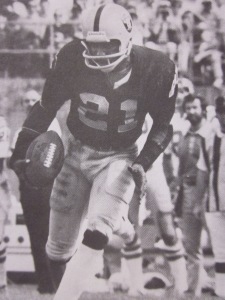 We tried to Build a Bully. But bullies always end up losing in the end, and that’s what happened.  We had the opportunity to grow, changed and develop into a Good team.  But going 8-8 crushed that dream.

To me the most important step going forward is to bring back all our old players- when Marcus Allen lights the torch before the game we will know that the healing process is complete. It’s already begun, Chucky came home to cheers and many old players have returned. Old fans are also returning.  Our history and legendary franchise forms the rock solid basis for many great years to come.

Healing will take time, and there is only one medicine that can help the process- JUST WIN BABY!!!!!!!!!!!!

Raiders 2.0 has begun and the next 50 years should be every bit as thrilling as the last 50! The ups and downs, the massive wins and triumphs after years of toil and pain. And Raider fans wouldn’t have it any other way…

Schooled by JMC the Raider Godfather 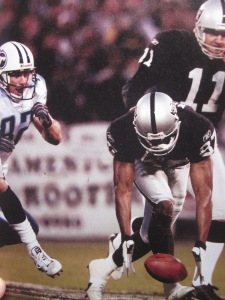 At an unnamed message board, I was recently addressed by a 50 year Raider fan JMC the RaiderGodfather. I was complaining about ref bias and he said that in reality, there is none. Based on all his years as a fan, he feels Raiders 2011 were deserving of the most penalties in history.
As an honest fan, I respect my elders and must accept his truth.

I have been schooled by the Godfather…

I do not feel the NFl has bias against the Raiders but I do feel they have been doing this for so long that they do not get the benefit of the doubt on close calls. The 2011 Raiders were not the sloppiest, stupidest, worse coaches, dirtiest and cheating-ist team in history to put it into your words. They were the most undisciplined team in NFL history last year which lead to them setting a new NFL record for penalties and that is a fact!

When I commanded soldiers I always told them that they were going to be their own best friend or worse enemy. Last year and for years this team has been its own worse enemy. They have killed themselves so many times on offense, defense and special teams because they have NO discipline! Until they do fix this they will never get back to the big dance, PERIOD!

Preseason Penalties: The war is over, for better or worse

After going 0-2 to start the preseason, Raiders haven’t looked too good.

However, one outstanding fact was the lack of penalties thrown by the college refs who are replacing the striking NFL refs.

Felt terrific to see the game without constant delays and pain of constant penalties!

So fun to see a brisk, entertaining game where both teams had an equal shot.

Last season was a sickening horrorshow of games poisoned by referee sabotage resulting in 2011 Raiders becoming the most penalized team in the entire history of professional football.

However, Al died. And that might have changed everything.

Because our first two games were brilliantly average in terms of penalties.

Will the preseason trend continue? Did we actually finally make up with the NFL and become a normal team on the regular playing field at last?

Non-Raider fans have utterly no concept of how bad it feels to be given the most penalties in the history of football, which absolutely smothered our otherwise terrific season.  Imagine EVERY horrible call from every game you’ve ever seen where your team was crushed in one unfair blow. Then put them all together into ONE season for the Raiders.

Yes, many penalties were earned. But this was NOT the sloppiest, dirtiest team in the last nearly 100 years.  That was totally unfair and the bias was VERY obvious to the careful observer.  This was direct interference in the games from the NFL. For the reasons why, refer to previous posts about Al Davis.

Al Davis went to war with the NFL. It was a fight to the death.

And the NFL won.

Now it’s time for the Raiders to become a normal team again.

The war is over, for better or worse.

Last year I guessed that 8-8 would win the division. I was only wrong about who it would be. And, it should have been.

Anyways, this year it looks like 9-7 will be needed to win the division, and this time I’m pretty sure I’m right who about the winner:

Many talking heads are saying that AFCW teams improved over the offseason but Raiders didn’t.

What they don’t see is that Raiders had WAY more room for improvement than the others. Yes, I respect Al, but the last decade was tough, we have a lot of catching up to do in our front office, systems and general approach to the game.

Reggie provides that in a way no one else could. We are now a 21st century organization, like it or not. And I think winning the division will be greatly liked by Raider Nation this year!

Raiders have been fighting the rest of the division with one hand tied behind their backs for a decade now. Old outdated systems, bottom of the barrel coaches, lousy marketing, etc. Our owner boycotted the league meetings! Absolute warfare with the NFL was the norm, and our penalties were the result of that.

And STILL Raiders were an inch from the division crown last season.

Now that we’ve caught up to the rest of the league organizationally, Raiders have a HUGE advantage over last years team, which makes them obviously the best pick for the upcoming year.

Last year was a painful experience. We lost Al, we lost our QB, we lost our RB, we lost our offense, our defensive coordinator lost his mind and we lost the division, even with an obviously superior team.

We have the same team, healthy, with a new front office and new place in the NFL.

This is the most optimistic and hopeful season I’ve experienced yet as a fan.

The AFC West rivals will wind up feeling the exact opposite by seasons end!