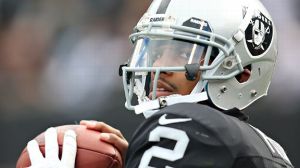 Terrelle Pryor #2 took the ball against the Giants in New York for Week 10. He practiced hurt after the Eagles game and got banged up even more in the Giants game. With a knee injury he was ineffective, but it was a close fought contest nonetheless. Raiders lose by 4 points. This was TP2’s only game of the quarter season.

Then in Week 11 to Houston for Mad Matt McGloin #14‘s first start as a Raider. Dude threw the ball well against the Texans and played a nearly perfect game. Solid defense and we win the game, an encouraging first game for rookie McGloin. Raiders win 28-23.

Then home in Week 12 to face a weak Titans opponent. Raider hero Bo Jackson #34 lit the torch before the show.  Shoulda won this damn game.  Second half meltdown by the Raiders after a solid start was the story this week and the next. Raiders lose 23-19. 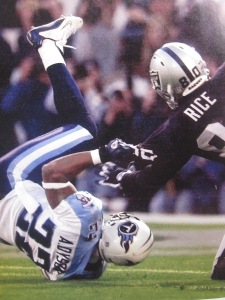 Finally our Superbowl the the year – Thanksgiving Day at Dallas  for Week 13. We were the early game. Raiders scored on the fumbled kick off and then Matt McGloin started throwing darts. But in the second half both offense and defense totally gave up and we lost. Again. By a very close score of 31-24. Fucking sick of the Cowboys.  Oakland utterly collapsed to give this game up. One third down stop or conversion was needed but could not be found. The whole second half was a disgrace.

So the season is over at 4-8. Positive signs include reduced penalties, and occasional excellence on defense. Injuries on both sides continue to mount and things don’t look great going forward. Lots of negatives.

The elephant in the room is the Quarterback Crisis.  Neither guy has shown to be the dominate player.  Our only goal a this point is to end the year with our QB going forward. A clear #1 and #2 for Pryor and McGloin. We need a guy to plan around going forward, someone to invest in and really give the best shot.  I don’t care who but it is IMPERATIVE that we figure this out and put the best guy in to develop long term. 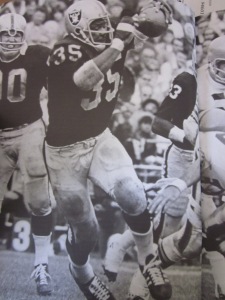