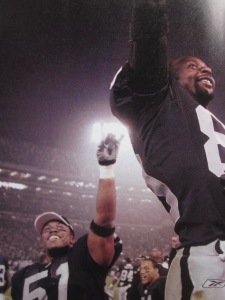 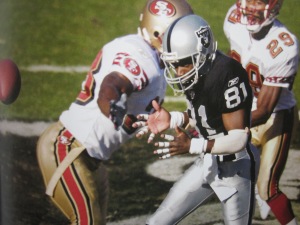 “There are many ways to play,  you just have to pick one and put everything you have into it.”-Greg Papa on the radio.

Great teams find an identity, a philosophy a direction to follow.

A great GM then finds the right players and coaches that fit that particular style of play.

The Oakland Raiders do not yet have that identity, that belief system, that conscious purpose.

For 50 year Al Davis had his way, for better or worse, and he brought every single player here to play in that mold.  His way or the highway, critics be damned. And that’s how Raider Nation came into being, based on a team that won consistently for decade after decade, through ups and downs.

Al was right sometimes and wrong others. But always, relentless and consistent in seeking players to fit his scheme.

We are half way into the first year without Al Davis in nearly five decades.

We do not have an identity.

We do not have a direction.

We do not have a solid, stable, successful philosophy to guide us.

We are back to 1962, floundering, failing, losing just like before Al ever got here.

In 2012, it’s Reggie’s turn. He is the ONLY one who can provide the direction, the teaching, the leadership and the foundation for guiding this team forward.

The strongest and most hopeful sign I’ve seen is the new discipline and intelligence of the team.  We aren’t playing stupid like before. We might be bad but we’re not dumb anymore. We are showing the NFL that we will now play the game and play by the rules.

The Raider Way cannot be changed or rewritten. But it can come to new life in a new way. The same poise, the same power, the same strength, the same Fire. But executed in a new way for a new era.

On paper Reggie McKenzie is the perfect guy for the job.

Results on the field will be his only judge. 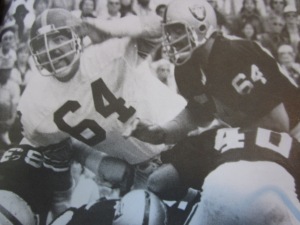 Going into the third portion of the season 3-5, and things have gone from bad to worse.

Totally demolished by the Ravens in Baltimore. Now at 3-6 with the Saints coming our way.

Raiders got murdered by the run game against Bucs, now the Ravens used their passing game and special teams play to finish the job. Oakland is on the ropes trying to avoid a KO.
My dream of going 4-0 against the AFC North has been dashed. And the way the Bengals are improving, our chances of going 3-1 in this quarter to stay in the playoff hunt is going to be hard to achieve.

Pride and Poise is draining away fast. Our coaching staff is worse than last year. Players seem to be losing their edge and motivation.  This is not the Raider Way.

The jury is still out, but as our hope for the season dribbles down the drain, the New Era of Excellence is starting to come apart at the seams.

Raiders stand for good vs evil, faith, patriotism, willpower and pride. Protecting the values we love, and permanent conviction in what is right. Never budging in the face of danger or derision.  Arrogance even, this means we can never be swayed from our course.

I’ve never seen a losing season as a Raiders fan.  I’m not ready for that.

Going into this year we had the best team in ages, at least on paper. Coaching has let us down, not to mention the ball bouncing off of guys hands over and over and over.

Likely we will see a whole new team next year with our cap struggles and Reggie’s rebuild.  Hopefully our coaching staff can show improvement or they can get thrown overboard for all I care.

The road ahead is dark, dreary and dangerous. And that’s exactly how a Raider fan wants it to be…

The second quarter of the 2012 campaign is now over, and Raiders went 2-2  in that period.

For a new owner, new GM, new head coach, new offense and new defense, that’s pretty much to be expected.

Oakland Raiders at the Coliseum

One observation is that the team has played every team close, and even in our losses the Raiders were in it up until the end.

The good news is that Palmer is a franchise QB, with a huge amount of talent, toughness and heart.

But there is much bad news, including Darren McFadden’s latest leg injury.

Going into the third quarter of the season without a running back will make the road ahead very difficult.

Wins against Kansas City and Jacksonville were satisfying. Last minute losses to Falcons and Bucs were painful but not unexpected.

After last years constant turmoil and chaos, it’s been refreshing to have a year of low penalties, low injuries and general decent football. Not as exciting or insane as Raider Football is known for, but I could use a more relaxed year.

I miss the wins we put together last year at this time.  But perhaps we start slow and go big at the end rather than the reverse, as Raiders dropped 4 out of 5 to finish the season last year.

Can Dennis Allen and his staff get creative, take risks and get us in position to win games?

Can Raider defense finally gel and stabilize to stop the run at an average level?

Can Raider offense get a touchdown before the end of the second quarter?

The race for the division has begun to heat up and Broncos are on fire. Raiders must win 3 out of four in this next quarter of the season in order to stay competitive.

QB Carson Palmer went 9-4 against Baltimore as a Cincinnati Bengal, passing for 3,202 yards.

Raiders need to win this game against the Ravens, and follow it up with wins against Browns and Bengals in order for us to make the playoffs.

But to be worthy of the Silver and Black, there is no quarter asked or given.

Cliff Branch, an Oakland and Los Angeles Raider, lit the Flame to honor Al Davis before the 2012 Week 9 game versus Tampa Bay.