My first game was at the Oakland Coliseum in late 1998. A cold rainy, crappy day way up high in the nosebleed seats. I can’t remember much about that day, it was deserted in the stands and the Raiders got shut out by Dan Marino’s Dolphins. It was a discouraging and painful day with 6 interceptions by Miami. The Raiders were dismal and I forgot about football for years.

The next time I watched football was at the local movie theater. We got a pitcher of beer and watched the Raiders on the big screen in Super Bowl XXXVII against the Buccaneers. Needless to say, I left that day dismayed, feeling like Oakland could never catch a break, why bother…

Many years went by. Then one day in 2009 visiting the in-laws in Ohio I noticed that Oakland was on TV, against the Bengals. I felt that the Raiders were sure to lose, but against all odds, they won! Suddenly I felt a taste of victory and I decided that I needed to start rooting for the Raiders.

Fast forward to 2010, home game against the hated Chiefs.. Sellout crowd at the Coliseum was electric and the vibe was explosive, unlike anything I’ve ever experienced before. Every KC possession was greeted with roars of rage, demoralizing them and weakening their spirits. The game was neck and neck, a very even match up.  When the Seabass kick won it in overtime, the place almost exploded, Raider chants echoed for ages afterward, it was a victory that filled my brain for weeks.

Speaking with some older Raiders fans, I’ve heard that the Raiders lost something when they left town and went to southern California. Perhaps that’s just because they are east bay folks, but maybe they are right? It’s said that Al Davis broke the fan’s hearts by moving the team, and things haven’t been the same ever since.
Then again when you look at history, the LA Raiders won the Superbowl, so they must have been doing something right! Fans in So Cal still love the Raiders and mob the Chargers stadium every year to show support.
Seems like ever since the Raiders came back from LA they’ve struggled to regain their rightful position atop the NFL. And since the Bay Area isn’t very football focused, sellouts are hard to find. The Raiders image also got more “gangsta” during the LA years, so many middle class types think poorly of the team.
I think there is something unique about the Nor Cal/So Cal relationship that the Raiders have created. How many things in life connect these two separate universes? Not many! After the Chiefs got clobbered in overtime at the Coliseum last season I was hugging So Cal dudes and shaking hands with bros who I’d never connect with in my normal life. The Raiders united us across regional, class, race, everything. They drove all the way up from LA for the game and I thought that was so awesome.
I thought, maybe the Raiders should play every other year in Oakland and Los Angeles, so both fan bases get in on the action! 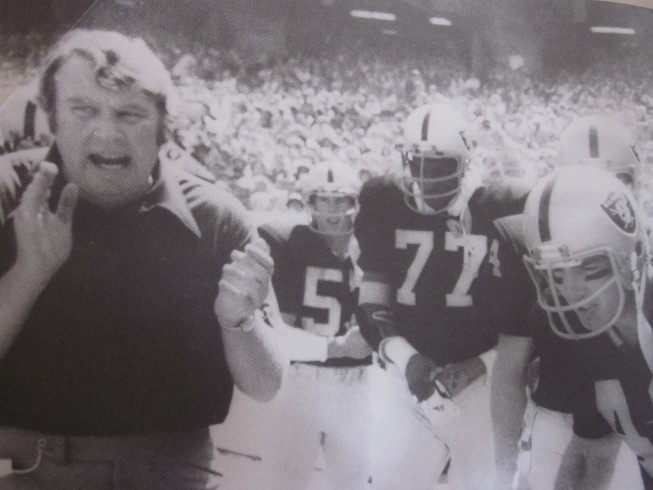 Welcome to Pride & Poise my blog about the Oakland Raiders.

My goal is to give a new fans perspective, as a citizen of Oakland, CA who one day became a total Raiders fanatic.

Others will discuss the stats, highlights, strategies, tactics and draft picks.

I’m here to talk about some of the deeper and more meaningful issues that underlie our love of the game of pro football.

Most importantly, to glorify the Team for the Decades: THE OAKLAND RAIDERS!

Just Win, Baby! is the most popular of the phrases and speaks to the owner Al Davis’s total obsession with winning. From the start his goal was to win nothing less. That means every move he made was oriented toward winning the championships, keeping his eye on the prize and never settling for less. I think it also comes from his Bronx street attitude of always going for the top, anything less than the best is a failure.  This motto has a catch-22 though, in that sometimes trying to win NOW sets you up for failure in the long term. You can develop a short term mentality and that’s dangerous in this game.

Commitment to Excellence  is the other well known phrase. This one is about quality, about long-term values that last from game to game, season to season.  The goal is to WIN but the way to achieve that goal is to create and instill excellence in your team.  Again, Al will accept nothing less, and if you don’t achieve excellence you will be fired!

The final slogan is Pride & Poise. This is the motto I’ve chosen for this blog, as it is less known and less discussed.  As much as winning and excellence of play is emphasized, the attitude and comportment of the players is of equal importance. This blog is dedicated to investigating, What is this pride and poise that a Raider must always possess?  I won’t try to answer that here but here are a few ideas:

Pride & Poise: playing every game up until the last second, no matter how long the odds.

Pride & Poise: carrying forward Raiders legendary history and success, never forgetting this team was once the best in all of professional sports and can be again.

Pride & Poise: Playing up the the edge of the rules, and past when necessary to make a statement.

Pride & Poise: No apologies for demolishing and crushing opponents into the ground, and no whining when we lose.

Pride & Poise: Expecting extra penalties from the referees, and knowing every game must be won despite it.

Pride & Poise: Making sure opposing teams and visitors never forget their visit to the Black Hole…

Pride & Poise: Giving respect when deserved and taking it when it’s earned, even if it means a few personal fouls!