Cruisin’ With the Tooz: Part I

In the practice scheme of the Raiders, Wednesday was almost always Defense Day, a grueling, full-contact practice that was nearly as intense as an actual game. Our owner, Al Davis, wanted it that way. Wednesday was one day of practice he never missed. If people weren’t hitting, Al never said much. He just gave us The Look. Like magic, the practice would heat up. And by the time I walked off the field each Wednesday, I enjoyed going out just to take my mind off my banged-up body.

Football is a violent game and it’s best played with a violent frame of mind. Once you walk on that field you’d better be feeling angry. You just can’t manufacture your rage in the tunnel before each Sunday’s game. You have to stoke it all week long. Banging against people at practice who are as big and ornery as you are–even people you like–is bound to cause confrontations. Practice fights are inevitable. If a guy is feeling mean enough to go after one of his own, then God help his opponent that Sunday.

Our quarterback for the Super Bowl was Jim Plunkett. He had started the season on the bench, but moved to number one when Dan Pastorini broke his leg in game five of the regular season. I have to admit it, I wasn’t very confident when Plunkett replaced Pastorini.  He had won the Heisman but had been beaten up badly at behind New England’s porous offensive line. By the time he got to the 49ers Jim was shell shocked from the punishment.His confidence was gone and he had acquired a terrible habit– if you gave him any kind of pressure, he would throw the ball before he had to. Any time Jim went back to pass those first few games, we all got a little nervous. I’m happy to say Jim proved me wrong.

As for the 1980 Super Bowl, a lot of people never expected us to even get close. Each of the two previous seasons we’d gone nine and seven and missed the playoffs. As 1980 approached, several publications were picking us for last in our division. 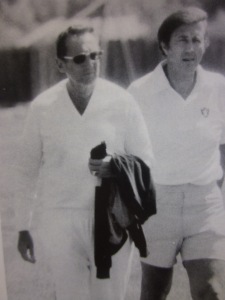 Welcome to The Pit. The Pit is where I used to play, where the offensive and defensive linemen play. If you’re the average football fan you don’t pay much attention to The Pit when you’re watching a perfectly thrown spiral going to a streaking receiver.  But the glamor positions are not where football games are won and lost. Football games are decided in The Pit.

The Pit is a world within itself–dangerous, desperate, primitive.  It’s inhabitants are the biggest, strongest players in the game.  In order to win the game you must first win the battle of the hitting. But the hitting in The Pit is by far the most constant. Other players get moments of rest, but in The Pit the contact never stops.

You don’t really play in The Pit, you survive it. The Pit is brutally isolated. The ball is often forgotten, and no one keeps score.  You get stepped on, jumped on, bent, twisted, and kicked. In The Pit there is no room to stretch out, you’re all jammed into a tightly packed area, with helmets and shoulder pads and pumping knees.  When there’s a pile up in The Pit, sometimes you feel like it’s difficult to breathe.

The Pit is not for the weak of heart. But for all its ferocity, I found satisfaction playing there. It was all face to face, eye to eye. You were completely on your own. Nowhere to hide, no one to help you. There was no bullshit in The Pit. No lawyers, no agents, no contracts, no hypocrisy, no hype, no backstabbing. Just the game.

Holding was a given. And, yes, if they wanted to, the refs could call holding on every play. It wasn’t a question of how you got held, but who was doing the holding.  The longer an offensive lineman was in the league, the more adept he got at holding. The most popular ploy was to grab you by your jersey, fall down, and pull you to the ground. It was the guys who would blatantly wrap their arms around your legs, flat out tackle you, that used to piss me off.

In 1978, the league changed the rules about holding. Offensive linemen no longer had to cheat– the league made it legal for them. It was no coincidence. NFL defenses were getting too good. Scoring was down, sacks were up. Six to nothing games don’t sell tickets, 35-30 games do. Defense is bad for business. So the league changed the rules. In the old days the blockers had to keep their elbows locked and pointed toward the sidelines, with hands pulled in to the jersey. The new rules said that they could extend their arms and open their hands. Offensive lineman had a license to hold.

But what really made me mad is when they outlawed the head slap in 1977, another effort by the league to hinder defensive linemen and jack up scoring. The head slap was simple–you swung your outstretched arm into the helmet of the opposing player. I used to head slap all the time. That’s all I ever needed. As soon as an offensive lineman took his eyes off me, I would run right by him.

Offensive linemen had other means of retaliation.  They would thrust the palm of a hand under your facemask and jab you in the throat. Or they’d grab your facemask and practically twist your neck off. If you were already going by them, they’d leg whip you–spin around and kick you in the back of your knee. Done hard enough it could leave you black and blue. Done with malice it could break your ankle.

When the circumstances called for it, I had several means of retribution. I could throw my head slaps with more ferocity. I could grab a man by his jersey, pull him to me, and butt him in the facemask with my helmet.  I almost always stayed away from that type of thing. The only time my sense of reason went out the window was when I felt my health was being endangered, when I knew someone was deliberately trying to maim me.  Such as, whenever I played against the Denver Broncos. 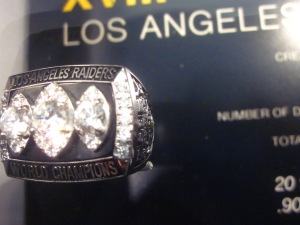 I’ve never in my life seen a Raider try to end another player’s career. They may push and point and provoke, and even punch. But the Broncos went far beyond punching. They hurt some people badly. Denver’s favorite ploy was a variation of something called the crackback or the chop block. When a defender–usually a defensive lineman–had his back turned, an offensive player would plow into the back of his knees with his helmet or shoulder pad. They would use two men– one to stand you up at the line of scrimmage, another to drill you from behind.

At the snap of the ball, the offensive tackle would engage you at the line of scrimmage. While you were still tied up with the tackle, the tight end would plow into the back of your knees with his helmet.  On Denver Claudie Minor was the tackle and Ron Egloff the tight end.

Denver used to chop me at least a couple of times a game, more often if I was putting a lot of pressure on their quarterback. One time I decided I’d had enough. Egloff hit me from behind and my leg bent back in an awkward position. I was screaming and cursing at Egloff I wanted to know why he cut me, I told him I wanted an answer and I wanted it now. Egloff’s face turned a pale white. “My coach told me to do it,” is all he said.

He didn’t say which one but I’m sure he meant their head coach, Red Miller. I knew how Red Miller felt about the Raiders. He hated us because we always used to beat him. In the Raiders, Miller saw an obstacle that was keeping the Broncos from greatness. Miller didn’t have the personnel to beat us fairly, so he would stoop to almost anything.

In 1981, after several teams repeatedly complained about the Broncos, the league took a “stand” — you could not crackback against a man who is engaged with another blocker. I think it was too little too late. A lot of careers had already been lost. With the way our legs got ripped up, I’m amazed that defensive linemen lasted as long as they did.

Playing against the talkers never bothered me. In fact, I liked it. There was nothing better than playing against a guy with a nonstop mouth, then seeing him get quiet when you drilled him. And you could always tell when you had a talker beat because he would suddenly shut up. He was too discouraged to keep it up. The scariest guys were the ones who never said a word. No matter how hard you hit them, they just popped back up like you were nothing.

Early in his career, Matt Millen was probably the biggest taunter on our team. And when Howie Long is made enough, he’ll challenge a guy to meet him after the game in the parking lot. But then, I don’t think Howie is afraid of anyone. You can say just about whatever you want to, when you’re on the field. A football field is a private world, whatever you say is not going any farther.  What you don’t do is degrade an opponent to the press, do that and you’d better watch yourself. 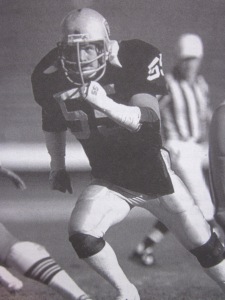 Jack Rudnay was a real friend, he was one of my teammates when I played with the Chiefs. He was their center for thirteen years, and when people talk about “throwbacks,” they are talking about players like Jack. In a game against the Bears, Jack once broke his little finger. Even though the bone was sticking out, they pushed it back into place, taped it to his next finger, and he only missed two plays.

Professional football, obviously, is not a game to be taken lightly. When John Madden was coaching the Raiders, the Saturday before a game he would give each player an itinerary for Sunday.  At the point on the itinerary for listing the game time, John wrote three words: GO TO WAR.

Although the NFL eventually made him remove that from the itinerary, that’s what football basically is. The consequences are rarely as final or brutal as a war, but some of the principles are the same. If you get right down to it, you are fighting for your life out there.